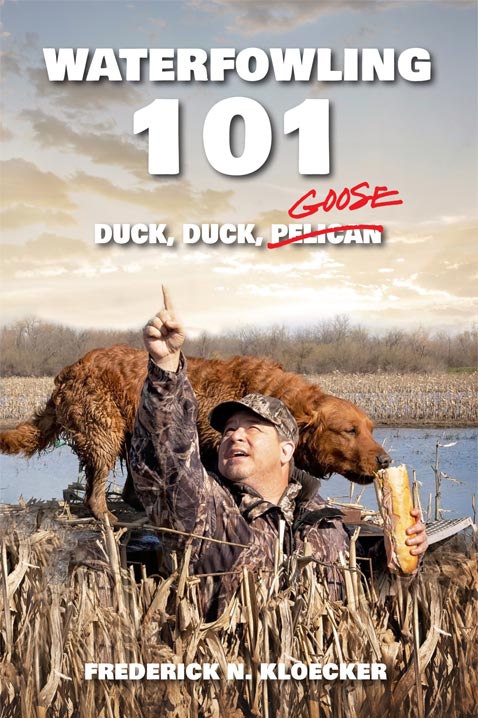 Without warning, Jon forcibly shoved me to my left. Before I could even process that he had pushed me, one of the oncoming ducks that had been shot directly in front of us slammed into the wall of the blind with a ringing impact directly behind where my head had just been.

The duck, which was most likely dead already, experienced a violent and instantaneous deceleration before falling to the bench, coming to rest on my ammo bag and an extra pair of gloves. To say that I was quite lucky not to have been hit by a deceased three-pound feathered anvil traveling at thirty-plus miles per hour was the understatement of the day.

I picked up the poor thing and could feel the crumbled skeletal structure inside its body. In fact, the impact was so loud and hard that I felt it necessary to actually inspect the steel blind for a dent.

As that excitement was dying down and the dog was feverishly gathering and retrieving the massacre from the icy water, we reloaded while another group of ducks began to hook over the south side of the slough. The dog healed to the bank and stood motionless in the mud as Big D started calling them in. Napoleon began calling as well and another group curled in and joined the first. I could see all of this as I stood still glaring through the tall grasses used to camouflage the blind.

As they approached, Napoleon said, “Nobody move; nobody shoot. There’s more.”

The team of ducks flew by as we all stood frozen (almost literally) in place. There had to be fifty of them in tight formation flying past us at about thirty feet. The birds turned and flew behind the blind. The calling continued relentlessly.

“They picked up another big group and they’re starting to swarm,” Big D muttered. “We’re gonna hammer these ducks.”

As they curled around and locked back into their approach to the decoys, I was reminded not to flinch until the call was made.

My heart was pounding, but I held my ground and watched what had to be well over a hundred and fifty ducks cupping their wings and beginning to fall into the decoys. After nearly half of them were floating peacefully on the water and paddling around squawking at one another, and the remaining birds were locked up and descending rapidly into the decoy field, the order came from Napoleon, “Get those birds!”